Time to put the garden to bed

Odd expression that, but I think we get the idea.  Things are looking a bit ropey out there when I stand at the French windows, and they’re going to look much worse unless I sort things out.  It seems harder in the autumn though, it’s much less like fun dismantling the

summer garden than getting it up to scratch in the spring, but in fact there’s so much to do and I know it’ll make a difference.

I always know it’s time when I have to clear the tomatoes out of the greenhouse.   There’s still one plant left which has some fruit which might just ripen but the rest are on the compost heap.

Once I’ve done that it’s the ideal opportunity to give the greenhouse a clean inside.  Brush down all the glass and then wash it with a mild disinfectant and clean the staging and shelving.   Try to choose a dry mild day so that any tender plants will be OK outside until everything’s dried out.

Then I can look at what I need to bring into the greenhouse to save for next year.   There are always loads of pelargoniums.   I love them and try to save as many as I can.  They’ll be happy in a dryish compost kept somewhere frost free.  I generally take off the flowers and prune them back to about 4” or so…I could have taken cuttings a little bit earlier but I didn’t…so I’ll try to hang onto the plants.  If it gets really cold in the greenhouse either it’ll need heating or they’ll have to come into the house.

There are plenty of other things I might like to keep.  This year I don’t have any very nice dahlias.  I lost some lovely ones by leaving them in the ground last year.   In a mild winter they’ll be fine outside but we’ve had some very cold ones so it’s safer to lift the tubers, dust off the soil and store them in dry compost till the spring when you can bring them back into growth again.

I will take cuttings of my salvia ‘hot lips’.  I love it and I have taken cuttings before to ensure I keep it year after year.   I’ve lost the parent plant more than once so I know I need to get some cuttings.  I’ll push them into a mixture of compost and sharp sand and cover them in a polythene bag and they’ll be in the greenhouse frost free till the spring.

As for the mixed  border, I tend to stand back and take a view.  There are things that need to be cut back and look a messy tangle of dead leaves, and they’d be better on the compost heap, but there are lots of other things looking great – the sedum and the grasses shine in the sun, lots of the cosmos  and the marigolds are still flowering like mad, as is the nasturtium that’s climbing over the fence.  So they can stay.  On the other hand the cerinthe is black, some of the early perennials like the campanula and yellow loostrife look sad and need cutting back.  But other perennials, which are over for the summer will stay to give some structure for the winter and for the bugs to feed from.  Things like the echinacea  and the eringyum.  So don’t be too ready to clear everything away too soon. 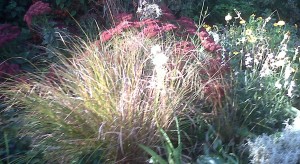 I almost always plant bulbs.  All kinds of bulbs…..it’s no too late for daffodils and you can plant tulips until December, and as well as them you can put in crocus, alliums, grape hyacinths…there really is such a choice, you only have to go into the garden centre or pick up a catalogue and the choice is vast.  They’re great though because you need to do so little, just dig a hole and drop them in and you’ll have a lovely display next spring.

Finally if I have home made compost that’s ready I like to mulch at this time of year.   Good well-rotted compost is the best and if you can put it down 3-4 inches deep so much the better.   That’s the bit that does feel as though I’m tucking up the flower beds for winter.   Let’s hope they sleep well and come back better than ever next year.

Next job – maybe in November – some autumn pruning! 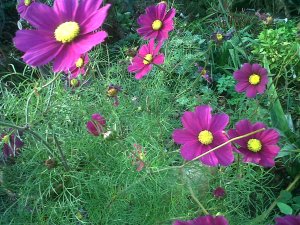