It looks just lovely out there, the

white stuff has completely hidden the disaster that is my garden.  So the only work that’s happened outside today is to clear the path to the door for the postman and to feed the birds again.  They’ve been swooping down even though they did have an audience of cats peering at them from the window at one point.   However, I discovered they don’t like olives.   Please tell me they won’t do them any harm.  I had some left from Christmas and they’ve been on the table for 3 days now and the birds were starving this morning and ate everything else – clearly not to British birds’ tastes!  To make up for it whilst I was out I bought some proper bird seed to add to the crumbs and cheese they have been getting which got a much better response.

One thing I did do was to the little conifers I have though and the bay trees.  The weight of snow on things like confiers, cordylines and palms can do quite a bit of harm, breaking branches and getting things out of shape, so give them a shake.   And I have a lovely yucca still in its pot which flowered wonderfully last summer, I can’t wait to put it into the garden in the spring and so I want to save it.   I’ve put the pot on its side so that when the snow thaws it’ll just run off instead of seeping into the middle of the plant and rotting it. 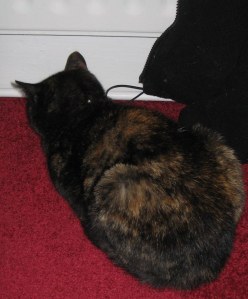 This is Lilly pictured this morning about 2 cm away from a hot radiator pipe.   How she didn’t burn her nose I don’t know.  She is positively disgusted with what’s happening outside and has shot in and out once only to my knowledge asking to be put out of the door where I cleared the snow rather than hopping through the catflap into the thick stuff.   Her friend Mistle is upstairs and has taken over the bed – he too has not been seen to leave the house.  Good news for the birds at least.

Looks like the weather is staying like this for a few days so it’s unlikely much will get done, but at least I can think about it!  If the sun comes out I might at least take some measurements and draw up a rough plan rather than working with the one in my head.