Now its the ice

So here I am still trapped indoors – today because of the ice and maybe later more snow.  So I’m pleased I’d br

ought a little bit of springtime inside – this snowy looking thing is a pot of 3 hyacinth bulbs, which I brought in last week.   If you had potted up hyacinths and got them ready for flowering in December you might have ‘held’ them outside in the cold until you wanted to bring them in to flower  – and fill the house with that lovely spring time smell.   One week on and they look altogether much more like it.

They’re replacing the ones I brought in at Christmas which have faded now.  As and when I ever get a fork into the ground again they’ll go in the garden and flower again next year – but at their natural flowering time later in the spring.

I’m delighted to say I’ve got another pot outside so I can have more in a week or two.

t cracking in the garden but things don’t look like changing outside any time soon.  The Bloms bulbs catalogue arrived yesterday and got me quite excited at the prospect of actually gardening.  But I am thinking about what little veggie seeds I can start off indoors in the next few weeks.  Of course a greenhouse that’s in one piece rather than stacked up against the house wall would be good – but soon it’ll be up I hope.  In the meantime I’m saving all the loo roll cardboard tubes and kitchen roll tubes to sow beans and trying to fathom where would be the best place to put the veg bed.   Not having seen the sun for some time makes it a bit tricky though!

There’s not a lot I can do out there, apart from keep feeding the birds.  There’s all kinds of things out there and my neighbour even saw a woodpecker having a go at an old dead elder at the bottom of the garden.  Here’s the evidence, now I just need to invest in some binoculars.  Obviously that’s now going to be a feature of the garden – I would have chopped it down but not now.

If you need some tips on bird feeding go to the RSPB website -they’ve got lots of ideas.  http://www.rspb.org.uk/advice/helpingbirds/feeding/

Mine have got fresh 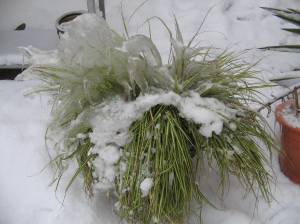 Just look at the state of this!  Its a carex evergold ornamental grass which was sitting in a bucket under the dripping gutter and has become totally encrusted in ice.   Shouldn’t have left it there really but with luck it’ll recover.

So now another afternoon in front of the fire I think.